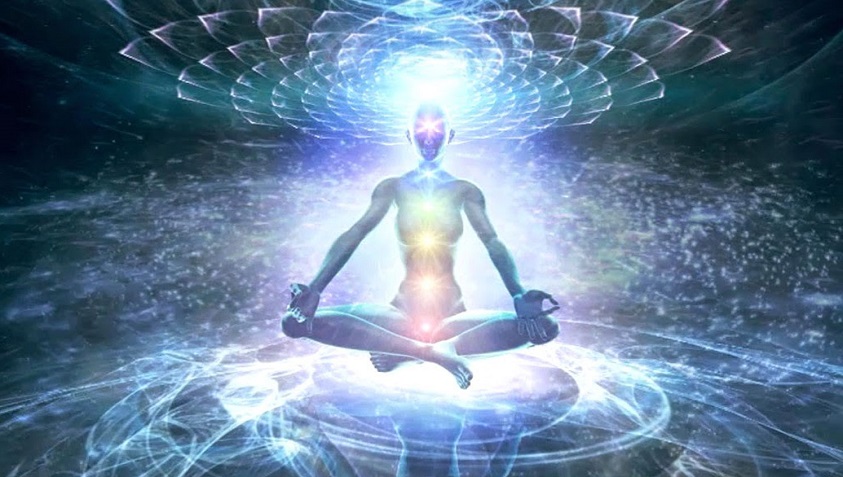 The seeker who successfully arouses their kundalini begets a great companion in their spiritual journey. That companion is an energy, a vital force, that makes the steep slopes of life easier to climb, It can advance  seeker’s spiritual aspirations.

Shakti of Kundalini is the divine power within every human being.  Known by many names, this sacred inner presence is the divine within. Kundalini Shakti is each individual’s own personal spiritual guide, And escort us to increase our spiritual awareness and growth. kundalini is the cosmic power in individual bodies. it is not a material force, it lies dormant or sleeping in the Muladhara Chakra, the centre of the body.

The chakras are any of the nerve plexus or centres of force and consciousness located within the inner bodies of men. In the physical body there are corresponding nerve plexuses, ganglia and glands.  The seven principal chakras can be seen psychically as colorful, multi-petaled wheels or lotuses.They are situated along the spinal cord from the base to the cranial chamber.  Additionally, seven chakras, barely visible, exist below the spine. They are seats of instinctive consciousness, the origin of jealousy,hatred, envy, guilt, sorrow, etc.

Kundalini process is the activity of mechanism, in a reduced or limited form, which maintains and controls the overall functioning of our body at all times. Which functions at a much higher level in the process of development of a human body in the womb. In the period of nine months a single fertilized ovum divides, grows and develops into a living, breathing, thinking human being. Body is made up of hundreds of billions of cells, of countless different types, all working in near-perfect harmony from the moment we are born.

As we grow and mature, the mechanism operates at a less active level. If it is made active again as a consequence of spiritual practices,  than begins a new phase, similar in the ways to the gestation process. And the brain and nervous system of the individual are ‘upgraded’ to a higher level of mental functioning.

It is generally believed that the genetic code is responsible for this process of development, It does not actually fabricate the building. This is achieved by the guiding intelligence of the construction team that is the super-intelligent principle PRANA, which using the genetic code as a blueprint, coordinates and controls the overall development of the new human being. The brain and nervous system are composed of sensory and motor neurons. Science believes that neurons are activated solely by electro-chemical processes and that impulses are transmitted from cell to cell via the synapses.  The brain communicates with the rest of the body through the spinal cord and nerves.But the ‘esoteric traditions’ of India speak of a subtle substance pervading every cell of the body called PRANA (sometimes referred to as ‘bio-plasma’ or ‘bio-energy’ in the West). PRANA is held to be the medium by which thought activity is carried on in the brain and is involved with the transference of impulses and sensations in the nervous system.

The Kundalini which rests dormant unless raised along the spine where the brain can fully alchemize its power into vital hormones and higher spiritual energy. When the Kundalini awakening has occurred it completes the circuit from the genitals to the brain via the spine. During the complete Kundalini experience all seven energy centers experience a breakthrough opening. The person then possesses great intelligence and strength. This is a biological process.

Those kundalini shakti that permeates is the energy of the universe. This requires an attitude of expectation and surrender which is difficult to cultivate for most people. That is primarily my story. Most people need instruction and demonstration by those who have gone before for practice. This biological process has historically been hidden by symbolic codes, occult practices, and religious dogma. This is the ultimate self-improvement practice. Awakening one’s own kundalini will ignite an internal, inside out process that effects permanent change.

A Sanskrit word Chakra means wheel, or vortex, and it refers to each of the seven energy centers of which our consciousness, our energy system, is composed. These chakras, or energy centers, function as pumps or valves,regulating the flow of energy through our energy system. The functioning of the chakras reflects decisions we make concerning how we choose to respond to conditions in our life. We open and close these valves when we decide what to think, and what to feel.

Our ancient belief; everything is possible, anything can be healed. But a question of how to do it. Understanding the chakras allows us to understand the relationship between our consciousness and our body, and to see our body as a map of our consciousness.It gives us a better understanding of ourself and of those around us. Thus begins the story of Kundalini.

The writer is a Delhi-based astropalmist and can be reached atinfo@astropraveen.com